A recent poll reported in “Inside Michigan Politics” found that 76% of Michiganites agree with the following statement:

“Biology teachers should teach Darwin’s theory of evolution, but also the scientific evidence against it.“

Only 17% of Michigagonians felt that “Biology teachers should teach only Darwin’s theory of evolution and the scientific evidence that supports it.”

If that poll question sounds familiar to frequent readers of ENV, that’s because it’s identical to one of the poll questions commissioned by The Discovery Institute earlier in 2006 and reported here.

To reiterate, the Michigan poll found that 76% of Michiganistas agree that:

“Biology teachers should teach Darwin’s theory of evolution, but also the scientific evidence against it.”

But then the Inside Michigan Politics Poll Report incorrectly says this data shows support for teaching alternatives to Darwinism:

“TEACH DARWIN, SURE, BUT TEACH OTHER THEORIES TOO: POLL

Charles Darwin’s theory of evolution? Intelligent design? Creationism? Anything else out there? Whatever, teach ’em all, say Michigan voters, who by a 4-1 margin claim they would prefer to see Darwin’s theory as well as theories opposed to it all taught, not just Darwin’s theory alone.”

To illustrate the difference between these two approaches, one can look at vertebrate embryos and recognize that they start developing very differently in a way which challenges the famous “biogenetic law,” inspired by the faked 19th century “research” drawings of Ernst Haeckel (below). One can inform students that actual embryological data challenges the notion of common descent without saying anything about intelligent design or other alternatives to Darwinism. 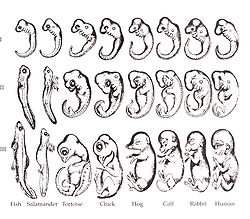 Conclusion:
Educators, legislators, and the rest of the public need to realize that teaching strengths and weaknesses of Darwin’s theory is different from bringing in a replacement theory for evolution. Traipsing Into Evolution, which I recently co-authored, explains how obfuscating the differences between a “teach criticisms of evolution” and “teach alternative theores like intelligent design” approach has resulted in “[a] chilling effect on open inquiry” (TIE, pg. 77) in places like Ohio and South Carolina where only “strengths and weaknesses” policies should were at stake.

Though Darwinists work hard to obscure the differences, these are different pedagogical approaches, recognized by the courts as such. Educators, legislators, and the public should understand the differences too.