[Editor’s Note: This is slide 3 in a series of 14 slides available at JudgingPBS.com, a new website featuring “Darwin’s Failed Predictions,” a response to PBS-NOVA’s online materials for their “Judgment Day: Intelligent Design on Trial” documentary.] 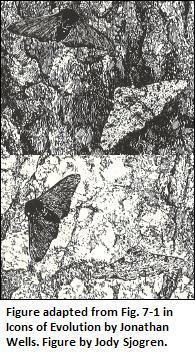 As noted in the Introduction, PBS asserts that the data “unequivocally” support the view that “[e]volution happens through natural selection.”

In this dogmatic statement, PBS has again failed to clearly define “evolution.”

If by “evolution,” PBS means that we can observe small-scale changes within species, then no one doubts that natural selection plays a role.

But in fact, many scientists have questioned whether natural selection acting upon random mutation is sufficient to generate new species or new complex biological features.

“Can changes in individual characters, such as the relative frequency of genes for light and dark wing color in moths adapting to industrial pollution, simply be multiplied over time to account for the origin of moths and butterflies within insects, the origin of insects from primitive arthropods, or the origin of arthropods from among primitive multicellular organisms? How can we explain the gradual evolution of entirely new structures, like the wings of bats, birds, and butterflies, when the function of a partially evolved wing is almost impossible to conceive?”1

Leading biologist Lynn Margulis, who opposes ID, also criticizes the standard Darwinian mechanism by stating that the “Darwinian claim to explain all of evolution is a popular half-truth whose lack of explicative power is compensated for only by the religious ferocity of its rhetoric.”2 She further observes that “new mutations don’t create new species; they create offspring that are impaired.”3

Stanley Salthe, author of an evolutionary biology textbook, proclaims, “I have become an apostate from Darwinian theory and have described it as part of modernism’s origination myth.”4 Evolutionary philosopher Jerry Fodor recently wrote that “at a time when the theory of natural selection has become an article of pop culture, it is faced with what may be the most serious challenge it has had so far.”5 National Academy of Sciences member Phil Skell also questions the explanatory utility of natural selection:

Natural selection makes humans self-centered and aggressive — except when it makes them altruistic and peaceable. Or natural selection produces virile men who eagerly spread their seed — except when it prefers men who are faithful protectors and providers. When an explanation is so supple that it can explain any behavior, it is difficult to test it experimentally, much less use it as a catalyst for scientific discovery. Darwinian evolution — whatever its other virtues — does not provide a fruitful heuristic in experimental biology.6Indeed, over 700 doctoral scientists have signed a public statement proclaiming their agreement that, “We are skeptical of claims for the ability of random mutation and natural selection to account for the complexity of life.”7 Yet PBS presents natural selection as the “unequivocally” accepted mechanism of evolution. Clearly there are significant scientific voices who dissent from the Darwinian view. Unfortunately, their voices are left out of PBS’s one-sided discussion of evolution.