[Editor’s Note: This is slide 4 in a series of 14 slides available at JudgingPBS.com, a new website featuring “Darwin’s Failed Predictions,” a response to PBS-NOVA’s online materials for their “Judgment Day: Intelligent Design on Trial” documentary.] 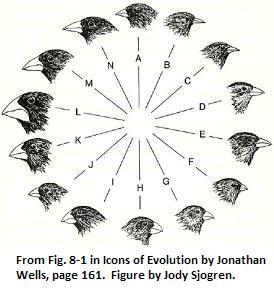 As discussed in Slide #1, proponents of Darwinism often employ the “Evolution” Bait-and-Switch, using evidence for small-scale changes and then over-extrapolating to claim that such modest evidence proves Darwin’s grander claims. In fact, this is precisely what PBS does in its online materials for “Judgment Day: Intelligent Design on Trial.”

A PBS web slide asserts, “Evolution happens through natural selection,” and then goes on to discuss small-scale changes in the sizes of beaks in finches on the Galapagos Islands as supporting evidence. Such small-scale changes do not demonstrate that natural selection can cause large-scale evolutionary changes, such as the origin of new body plans or perhaps even the origin of new species. In fact, all of the finch species in the Galapagos Islands remain so genetically similar that they can interbreed after millions of years of alleged evolutionary change.

If anything, the Galapagos finches demonstrate the limits of natural selection. Beak sizes increased during a drought, yet when the drought ended, finch-beaks predictably returned to their normal sizes. As biologist Jonathan Wells observes in Icons of Evolution, the bait-and-switch occurs when “evidence for oscillating natural selection in finch beaks is claimed as evidence for the origin of finches in the first place.”1 Are such Darwinist extrapolations warranted? According to UC Berkeley law professor and Darwin-critic Phillip Johnson, “When our leading scientists have to resort to the sort of distortion that would land a stock promoter in jail, you know they are in trouble.”2