[Editor’s Note: This is slide 7 in a series of 14 slides available at JudgingPBS.com, a new website featuring “Darwin’s Failed Predictions,” a response to PBS-NOVA’s online materials for their “Judgment Day: Intelligent Design on Trial” documentary.] 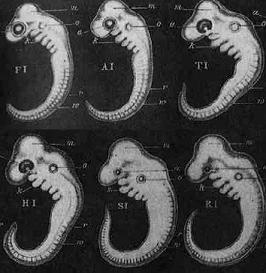 PBS observes that Darwin boasted that embryology provided “the strongest single class of facts in favor of” his theory of evolution. But Darwin penned those words in the 1860s, and developmental biologists have learned much since that time. In fact, Darwin staked much of his evidential support upon the work of the 19th century embryologist Ernst Haeckel. After Darwin, it was discovered that Haeckel promoted fraudulent data to falsely support vertebrate common ancestry by overstating the similarities between vertebrate embryos in their earliest stages of development.

Haeckel’s infamous embryo drawings obscured the differences between vertebrate embryos in their earliest stages, leading to widespread belief in the false idea that “ontogeny recapitulates phylogeny” (i.e. development replays evolutionary history). The factual data reveal that vertebrate embryos develop very differently from their earliest stages in a pattern that is unexpected if all vertebrates share a common ancestor. Darwin himself was a victim of Haeckel’s fraud, and had Darwin known the truth, perhaps he might never have made the statement that PBS quotes above.

But there are even stronger reasons to understand that modern developmental biology challenges Darwin. Biologists have discovered, as PBS puts it, that “microbes to man … share a common ‘tool kit’ of so-called master genes.” PBS claims this supports Darwinian evolution because living animal groups inherited these genes from a common ancestor. While intelligent design is certainly compatible with common ancestry, PBS ignores the possibility that such recurring fundamental genetic programs across species could also be explained as the result of common design, i.e. the re-usage of genetic programs that fulfill the functional requirements of animal development. Indeed, common design may be the best explanation for the many instances where these master genes control the growth of analogous body parts in widely diverse organisms where it is even not thought that the common ancestor even had the body part in question.

For example, vertebrates, sea urchins, insects, and various other invertebrate groups all use the same regulatory genes to control growth of their widely diverse types of limbs, but it is not thought that their common ancestor had a common limb. Similarly, vertebrates, insects, and jellyfish use similar master control genes to control the development of their widely different eyes, but their alleged common ancestor is not thought to have had a common type of eye. In these cases, living animal groups would NOT be expected to have inherited their genetic “tool kits” from a common ancestor because there is no reason to believe that the common ancestor was using that genetic toolkit for some common body part. As Wolf-Ekkehard Lönnig, plant geneticist at the Max Planck Institute for Genetics writes, “No theorist in evolutionary biology will ever derive chicken and insects from a winged common ancestor, and yet, clearly related sequences are specifically expressed in wing buds and imaginal disks.”1

Darwinists try to resolve such quandaries by appealing to extreme examples of convergent genetic evolution, what one might term genetic predestination. But such examples of extreme convergence strain the credulity of Darwin’s mechanism. Can blind and undirected natural selection cause many animal groups to independently deploy precisely the same genetic toolkits for development? Such a high level of genetic similarity seems highly unlikely to evolve independently numerous times in the history of life.