[Editor’s Note: This is slide 11 in a series of 14 slides available at JudgingPBS.com, a new website featuring “Darwin’s Failed Predictions,” a response to PBS-NOVA’s online materials for their “Judgment Day: Intelligent Design on Trial” documentary.] 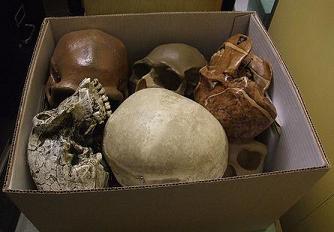 In 1980, the famed late evolutionary paleontologist Stephen Jay Gould noted that, “[m]ost hominid fossils, even though they serve as a basis for endless speculation and elaborate storytelling, are fragments of jaws and scraps of skulls.”1 PBS confidently asserts that our species, Homo sapiens, evolved from ape-like species, but the fossil record tells a different story. The fossil record contains two basic types of hominids: those that can be classified as ape-like and those that can be classified as modern human-like. But there remains a distinct break in the morphology of ape-like species and human-like species that is not bridged by our knowledge of the fossil record.

For example, PBS touts Lucy, a member of the hominid species Australopithecus afarensis, as a representative of humanity’s ancestors. But many studies have found that the australopithecines were more similar to modern apes than to modern humans. For example, Lucy is commonly called a precursor to the bipedal form of human locomotion, yet one study found Lucy had handbones like a knuckle-walking ape. Another study wrote, “We, like many others, interpret the anatomical evidence to show that early H[omo] sapiens was significantly and dramatically different from earlier and penecontemporary australopithecines in virtually every element of its skeleton and every remnant of its behavior.”2

These rapid, unique, and genetically significant changes were called “a genetic revolution” where “no australopithecine species is obviously transitional.”2 One commentator proposed this evidence implies a “big bang theory” of human evolution.3 Similarly, two paleoanthropologists stated in Nature that the first human-like fossils appear so suddenly in the record that “it is hard at present to identify its immediate ancestry in east Africa. Not for nothing has it been described as a hominin ‘without an ancestor, without a clear past.'”4

A Harvard evolutionary paleoanthropologist recently stated in the New York Times that newly discovered hominid fossils “show ‘just how interesting and complex the human genus was and how poorly we understand the transition from being something much more apelike to something more humanlike.'”5 Such an admission was echoed soon thereafter by a different set of evolutionary paleoanthropologists stating that “we know nothing about how the human line actually emerged from apes.”6 While these researchers undoubtedly themselves support the view that humans and apes share a common ancestor, perhaps PBS would do best to explain that there are many unsolved mysteries about human origins, rather than presenting the united front that humans are unequivocally descended from ape-like species: The truth is that skeptics of human evolution have ample scientific justification for their views.