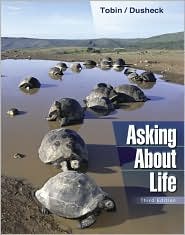 There have been recent news reports about a parent in Tennessee who wants his local school district to reject a textbook, Asking About Life, because it calls young earth creationism a “biblical myth.” I picked up a copy of the 1998 edition of Asking About Life and it’s true: the textbook consistently attacks, inhibits, denigrates, opposes, disparages, and shows hostility towards certain religious viewpoints. Evolution should be taught, but I see no reason why it must be taught in this manner alongside constitutionally questionable attacks upon religion. But the real travesty about the textbook is the fact that it (a) teaches students only about the pro-evolution evidence and never mentions any data as a scientific challenge to evolution, and (b) contains various inaccurate statements about the evidence purportedly supporting evolution.

As regards (a), the textbook opens its chapter “What is the Evidence for Evolution?” by endorsing the grand molecules-to-man metanarrative: “Biological evolution is the process that has taken life on Earth from perhaps a few mere flecks of RNA to the breathtaking variety of more than a million species” (p. 359). A few pages later it calls Darwin’s ideas an “unassailable theory of evolution.” (p. 365) Some of the errors in the textbook that comprise (b) will be discussed below.

Calling the body plans that emerge in the Cambrian explosion “just accidents of history” (p. 427), the textbook admits that the period saw “a burst of diversification unmatched in the history of the world.” (p. 425) It tries to explain this “burst” by asserting that sometimes populations evolve “quite rapidly,” (p. 426) with the main example being the evolution of Galápagos finches. Note that these finches all have the same body plan, can interbreed, and are in many respects indistinguishable. (As Jonathan Weiner writes in Beak of the Finch, “Only God and Peter Grant can recognize Darwin’s finches.”) It’s hard to imagine how the minute differences between Galápagos finches help us explain the evolution of life’s most diverse animal body plans.
Biogeography is said to confirm common descent because “Species all over the world are most closely related to those that live nearby.” (p. 372) That is, except for when they are not. This statement in the textbook is particularly inaccurate:

Similarly, the closest relatives of continental species are found in other, very different habitats on the same continent–not in similar habitats on different continents. Species in the South American tropics, for example, are most closely related to other nontropical South American species than to tropical species of Africa or Asia. (p. 372)

A final notable problem in the textbook is its claim that the molecular phylogeny based upon cytochrome C is “essentially identical to a tree made on the basis of other comparative studies” and this “correspondence is ample evidence of the power of molecular comparisons.” The textbook touts the cytochrome C tree, but it ignores the cytochrome B tree, which has striking differences from the classical animal phylogeny. As one article in Trends in Ecology and Evolution stated: “[T]he mitochondrial cytochrome b gene implied . . . an absurd phylogeny of mammals, regardless of the method of tree construction. Cats and whales fell within primates, grouping with simians (monkeys and apes) and strepsirhines (lemurs, bush-babies and lorises) to the exclusion of tarsiers. Cytochrome b is probably the most commonly sequenced gene in vertebrates, making this surprising result even more disconcerting.” (See Michael S. Y. Lee, “Molecular Phylogenies Become Functional,” Trends in Ecology and Evolution, Vol. 14: 177 (1999).) While the 1998 edition can perhaps be forgiven for not including this information, I just got the 2005 edition of Asking About Life and it also cites cytochrome C and alleges that “The evolutionary history suggested by amino acid sequence usually agrees rather closely with the history implied by the fossil record” and “The fossil record, anatomical comparisons, and molcular comparisons are internally logical and independently confirm [phylogenetic relationships].” (p. 319) But a paper in Nature in 2000 said something very different: “Evolutionary trees constructed by studying biological molecules often don’t resemble those drawn up from morphology.” (Trisha Gura, “Bones, Molecules or Both?”, Nature, Vol. 406:230-233 (2000).

Apart from these, the textbook wrongly claims that human embryos have “gill slits” (p. 379) and that “Artificial selection provides a model for natural selection, a possible mechanism for evolution.” (p. 382) To its credit, in a discussion of the Miller-Urey experiment, the textbook admits the atmosphere used was wrong, but this rare admission of scientific weakness is immediately countered by claims that “the exact composition of the early atmosphere may be moot” because “The first organic molecules could have come from asteroids, meteors, or comets.” (p. 456) Of course, the textbook makes no mention of studies which have shown that such impacts would likely vaporize organic molecules carried to earth. (See Edward Anders. “Pre-biotic organic matter from comets and asteroids.” Nature, Vol. 342:255-257 (1989).)

All throughout the text is a staunchly pro-Darwin-only viewpoint that gives no hint of the real scientific challenges to neo-Darwinian evolution or chemical evolution. While there may be constitutional questions raised by the textbook’s attacks upon religion, the biggest travesty of Asking About Life is its dogmatic, inaccurate, and one sided presentation of evolution.