Last year, during the bicentennial anniversary of Darwin’s birth, Nature released a free online packet titled “15 Evolutionary Gems.” Its subtitle was “A resource from Nature for those wishing to spread awareness of evidence for evolution by natural selection.” It might have been better subtitled ‘A evangelism packet for those wishing to spread the good news about Darwinism.’ After all, when Nature announced the packet, they said they were heeding a prior call which “urged scientists and their institutions to ‘spread the word'” about evolution and “highlight reasons why scientists can treat evolution by natural selection as, in effect, an established fact.”

The packet is to be used not just in schools, but also in home evangelism or relationship evangelism. At least, that’s basically what Nature said:

This week we are following our own prescription. Readers will find at www.nature.com/evolutiongems a freely accessible resource for biologists and others who wish to explain to students, friends or loved ones just what is the evidence for evolution by natural selection. … In a year in which Darwin is being celebrated amid uncertainty and hostility about his ideas among citizens, being aware of the cumulatively incontrovertible evidence for those ideas is all the more important. We trust that this document will help.

If all that weren’t enough, the back page of the packet shows a picture of a smiling young Darwin with animals flocking about him (lizards, birds, monkeys, flowers, sponges, turtles, etc.), much like the pictures of Jesus posing with lions and lambs on some cheesy religious tract. You have to see the packet to believe it: 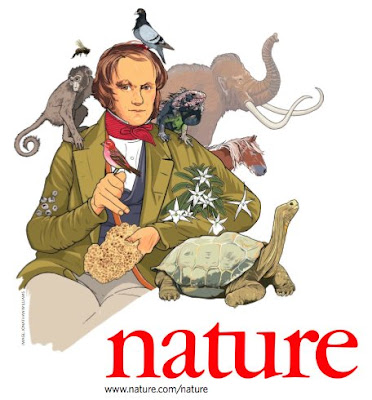 Should we be surprised that Nature — one of the world’s top scientific journals — is promoting evolution in this fashion? The respected historian of evolution Peter J. Bowler explains that Nature itself was originally founded in the late 19th century by T. H. Huxley and others for the express purpose of promoting a “campaign” to support Darwinism:

By exploiting their position in this network, Huxley and his friends ensured that Darwinism had come to stay. (Ruse, 1979a). They controlled the scientific journals — the journal Nature was founded in part to promote the campaign — and manipulated academic appointments. Hull (1978) has stressed how important these rhetorical and political skills were in creating a scientific revolution. The Darwinists adopted a flexible approach which deflected opposition, minimized infighting among themselves, and made it easy for others to join their campaign. Many, like Huxley himself, were not rigidly committed to the theory of natural selection; they were simply anxious to promote the case for evolution.

The packet is simply an extension of Nature‘s “campaign” for Darwin. But it is quite useful in one important respect: the packet is from the world’s top scientific journal and purports to show us “just what is the evidence for evolution by natural selection.” So if the evidence isn’t very strong, then that should tell you something.

As we’ll see, far from being “incontrovertible,” most of the “evolutionary gems” in the packet do not show any significant amount of evolution and might be best views as “microevolutionary” gems. A couple of the “gems” have little to do with evolution, but an evolutionary interpretation is added in after-the-fact.

Finally, the few “gems” that do deal with large-scale change face serious problems and might be termed “lumps of coal.” For the “lumps of coal,” their strategy is the same: ignore dissent and overhype the evidence.

At the end of this series, all the posts will be combined into a single PDF file which can be downloaded and distributed or printed off freely.

An Evangelistic Opening
Nature‘s evolution-evangelism packet opens with one of the most dogmatic statements imaginable in support of evolution. According to the packet, “Most biologists take for granted the idea that all life evolved by natural selection over billions of years … natural selection is a fact, in the same way that the Earth orbits the Sun is a fact.” Surely, if their claim is true (and not a bluff) then we will find no notable scientific dissent from the view that “all life evolved by natural selection.”

Just a couple years ago science journalist Susan Mazur (who is no friend of intelligent design) wrote that “hundreds of other evolutionary scientists (non-Creationists) who contend that natural selection is politics, not science, and that we are in a quagmire because of staggering commercial investment in a Darwinian industry built on an inadequate theory.” Two of those scientists might be National Academy of Sciences members Philip Skell and Lynn Margulis, staunch critics of the claim that “all life evolved by natural selection”:

“Darwinian evolution — whatever its other virtues — does not provide a fruitful heuristic in experimental biology. This becomes especially clear when we compare it with a heuristic framework such as the atomic model, which opens up structural chemistry and leads to advances in the synthesis of a multitude of new molecules of practical benefit. None of this demonstrates that Darwinism is false. It does, however, mean that the claim that it is the cornerstone of modern experimental biology will be met with quiet skepticism from a growing number of scientists in fields where theories actually do serve as cornerstones for tangible breakthroughs.”
— Philip Skell

“[The] Darwinian claim to explain all of evolution is a popular half-truth whose lack of explicative power is compensated for only by the religious ferocity of its rhetoric.
— Lynn Margulis

But there’s a deeper point here. If the claim that “all life evolved by natural selection” is “a fact, in the same way that the Earth orbits the Sun,” then shouldn’t it be as self-evident as the fact that the Earth orbits the Sun? But no one is making packets to evangelize for heliocentrism — because in that case the evidence is so overwhelming that no one of any consequence disagrees.

Nature‘s evolution-evangelism packet seems like a politically motivated attempt to spread the good news about Darwin. And given the power that the journal Nature wields within the scientific community, its dogmatic treatment of natural selection serves to stifle academic freedom and dissent from Nature‘s viewpoint. This leads me to suspect that the journal might overstate the evidential case for natural selection. Over the course of eight subsequent posts, we’ll see just how far these “gems” actually go to support the view that “all life evolved by natural selection” is “a fact, in the same way that the Earth orbits the Sun” is a fact.