With students back in school now for the year, many will learn not just about the “Darwin’s Finches” icon of evolution, as I noted recently. They might also expect to be taught Haeckel’s fraudulent embryo drawings. Our “Evaluation of 22 Recent Biology Textbooks and Their Use of Selected Icons of Evolution” showed that there are still multiple textbooks that use Haeckel’s inaccurate drawings. Likewise, we found that a number of supplemental curricula submitted for use in Texas last year included Haeckel’s faked embryo drawings.

The notion that Haeckel’s drawings were fraudulent or fake did not originate with proponents of intelligent design. Those criticisms originated with evolutionary scientists like embryologist Michael Richardson, who called them “one of the most famous fakes in biology,” or Stephen Jay Gould who said “Haeckel had exaggerated the similarities by idealizations and omissions,” and that “in a procedure that can only be called fraudulent,” Haeckel “simply copied the same figure over and over again.” Likewise, in a 1997 article titled “Haeckel’s Embryos: Fraud Rediscovered,” the journal Science recognized that “[g]enerations of biology students may have been misled by a famous set of drawings of embryos published 123 years ago by the German biologist Ernst Haeckel.”

According to the Science article, Haeckel’s drawings “show vertebrate embryos of different animals passing through identical stages of development. But the impression they give, that the embryos are exactly alike, is wrong.” Richardson comments on this as follows:

If so many historians knew about the old controversy [over Haeckel’s drawings], then why did they not communicate this information to numerous contemporary authors who use the Haeckel drawings in their books? I know of at least fifty recent biology textbooks which use the drawings uncritically. I think this is the most important question to come out of the whole story.

[W]e do, I think, have the right to be both astonished and ashamed by the century of mindless recycling that has led to the persistence of these drawings in a large number, if not a majority, of modern textbooks.

How Do Pro-Darwin Activists Respond?
In some cases Darwin lobbyists have responded by denying that Haeckel’s drawings have been used in recent textbooks. But this argument was easily demonstrated to be false, so it wasn’t very effective, so they were forced to come up with other responses. Believe it or not, today some Darwin lobbyists — like the National Center for Science Education’s Joshua Rosenau — actually defend Haeckel (and presumably, the use of his drawings in textbooks). And they think they’ve found at least one distinguished scholar to back them up.

That scholar is Robert J. Richards, a historian of science at the University of Chicago, and his paper is titled “Haeckel’s embryos: fraud not proven,” published in Biology & Philosophy in 2009. Using Richards’s paper as a cover, Darwin lobbyists now claim that Haeckel’s drawings are not “fraudulent” at all. They even push back further, saying that we (Darwin critics) “failed a basic standard of research” by agreeing with credible evolutionary scientists like Gould, Richardson, and others, who called the use of Haeckel’s drawings in textbooks “fraudulent” or “fake.”

There’s a catch, however. Though Darwin lobbyists seem to have failed to grasp this fact, Robert Richards’s article doesn’t help their case much at all. If you read it carefully, the paper concedes that Haeckel’s original drawings were inaccurate, and never defends their use in textbooks.

What Does Richards’s Article Argue?
Bob Richards admits that Haeckel’s infamous drawings show “considerable disparity” from photographs of embryos, and at one point acknowledges that Haeckel “egregiously erred” in at least one of his early embryo drawings. Richards also praises Haeckel for fixing errors in later drawings — conceding that the early versions were inaccurate. Nonetheless, Richards tries to defend Haeckel against the charge of fraud:

First, he notes that Haeckel’s original drawings “were meant for a popular audience, and thus some didactic license would have been permitted.”

Third, Richards seeks to rebuff charges that Haeckel “fudged the scale” on the embryo drawings. He observes that Haeckel’s “quite explicitly stated in the caption to his illustration that he reduced all of the images to the same size to facilitate structural comparisons.”

Fourth, Richards notes that Haeckel refined the images in later editions of his book: “Had the Science article compared Richardson’s photos with illustrations from Haeckel’s later editions, the argument for fraud would have withered.”

You will notice that these arguments are aimed at exonerating the man Haeckel from charges of “fraud.” But what does any of that have to do with excusing what many modern textbooks have done and are doing with his drawings? Little or nothing. None of these arguments justifies the use of Haeckel’s original inaccurate embryo drawings in the uncritical manner they are used (and re-used) in some modern biology textbooks:

So even if we concede every point to Richards, we still have biology textbooks that use Haeckel’s original inaccurate drawings, without disclaimers about their not being to scale, all to teach an inaccurate lesson that the early stages of vertebrate embryos are highly similar. How is that justified? These arguments might go a small way towards absolving Haeckel himself, but that’s all. The fact remains that what many biology textbooks teach on this topic is wrong.

One Substantive Argument
Richards does try one more argument in defense of Haeckel’s drawings. This one indeed makes the case that Haeckel’s original drawings weren’t inaccurate after all — or at least not so inaccurate as is often claimed. Here, Richards’s foil is the 1997 article in Science, “Haeckel’s Embryos: Fraud Rediscovered,” which he claims made inaccurate comparisons between Haeckel’s drawings and actual photographs of embryos. Richards complains about the lack of any caption in the Science paper noting that embryos aren’t to scale, and critiques the orientation in which a chick embryo was photographed. He also argues Haeckel was justified in omitting the yolk sac from his drawings because including it “exaggerates” the differences between the embryos. So if we believe Robert Richards, then the journal Science “exaggerates” because it used undoctored photographs, whereas Haeckel was truthful because he omitted components that showed differences. Sound a bit Orwellian? It certainly does to me.

In any case, Richards goes on to make what he considers to be an accurate comparison of Haeckel’s drawings to the actual embryo photographs — with the yolk sacs digitally removed. After presenting his photoshopped embryo photographs, he concludes: “the differences between the photograph and illustration are not nearly as great as presented in the Science article.” But differences being “not nearly as great” still implies there remain differences between Haeckel’s drawings and whatever biological reality remains in Richards’s doctored photographs. Indeed, Richards’s “improved” comparison shows the opposite of the point he wants to make: Even after his so-called corrections, Haeckel’s embryo drawings still look strikingly different from actual photographs of embryos. Check out Figure 5 of Richards’s paper to see what I mean: 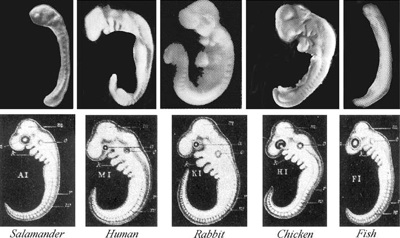 Remember how these sorts of diagrams are used in textbooks: We’re supposed to think that all the embryos look highly similar, thus reflecting their common ancestry. But Haeckel’s drawings (bottom row) are much more similar to one-another than are the actual photographs of embryos (top row). Moreover, the corresponding embryos in the two rows have many differences from one another, showing that Haeckel’s drawings were inaccurate, and obscured the differences between the embryos. Thus, as can be seen, even after Bob Richards’s “corrected” (i.e. doctored) the photographs in top row, Haeckel’s drawings (the bottom row) are much more similar to one-another than real embryos.

Here’s something closer to what the embryos really look like: In the end, Richards’s defense of Haeckel’s original drawings is as modest as it is unconvincing. His substantive argument barely exceeds 300 words — the size of a letter-to-the-editor in a local newspaper — and this is supposed to overturn the findings of an extensive 16-page peer-reviewed research paper in Anatomy and Embryology by Michael Richardson and other embryologists which found the following:

Our survey seriously undermines the credibility of Haeckel’s drawings, which depict not a conserved stage for vertebrates, but a stylized amniote embryo. In fact, the taxonomic level of greatest resemblance among vertebrate embryos is below the subphylum. The wide variation in morphology among vertebrate embryos is difficult to reconcile with the idea of a phyogenetically conserved tailbud stage, and suggests that at least some developmental mechanisms are not highly constrained by the zootype.

Another point to emerge from this study is the considerable inaccuracy of Haeckel’s famous figures. These drawings are still widely reproduced in textbooks and review articles, and continue to exert a significant influence on the development of ideas in this field (Wolpert 1991; Alberts et al. 1994; Duboule 1994). Sedgwick (1894) and Richardson (1995) have argued that Haeckel’s drawings are inaccurate, and we have now provided persuasive evidence that this is indeed the case. This is particularly apparent from the atypical body form of agnathan, anuran and caecilian embryos shown here (Figs. 3, 5). Haeckel inexplicably omitted these species from his figures. It is hard to believe that he could not have obtained embryos of a common anuran such as Rana temporaria. Furthermore he fails to give scientific names, stages or source of the specimens illustrated. These inaccuracies and omissions seriously undermine his credibility.

Contrary to the evolutionary hourglass model, variations in the adult body plan are often foreshadowed by modifications of early development. … These modifications of embryonic development are difficult to reconcile with the idea that most or all vertebrate clades pass through an embryonic stage that is highly resistant to evolutionary change. This idea is implicit in Haeckel’s drawings…

(Michael K. Richardson et al., “There is no highly conserved embryonic stage in the vertebrates: implications for current theories of evolution and development,” Anatomy and Embryology, Vol. 196:91-106 (1997).)

Professor Richards’s paper doesn’t even attempt to address the vast majority of Michael Richardson et al.’s arguments that Haeckel’s drawings were inaccurate compared to actual vertebrate embryos. It certainly doesn’t justify what we find in textbooks today that use Haeckel’s original drawings to claim vertebrate embryos are highly similar.

Predictable Responses
Time and time again, when Darwin defenders have weak arguments, we observe that they compensate by using outlandish rhetoric. Does Bob Richards succumb to this temptation? In fact he does: His paper noticeably departs from the sort of calm, collected tone we expect from a neutral scholar. Rather, it adopts a polemical tone — the sort of ridicule you get in papers driven by some kind of an agenda. Here’s a prime example of what I mean:

Appease an angry God? What is Richards talking about? I can’t speak to whether God is angry or not, but it sure sounds like Bob Richards is upset. My sense is he’s trying to compensate for a lack of persuasive arguments and a felt need to deflect away from the fact that there is widespread use of Haeckel’s fraudulent drawings in many modern biology textbooks.

So if you’re a Darwin lobbyist defending a textbook that uses Haeckel’s inaccurate drawings, be forewarned: neither Bob Richards nor any other credible authorities I’m aware of endorse the unqualified and uncritical use of Haeckel’s original inaccurate drawings in biology textbooks today. You’re on your own.