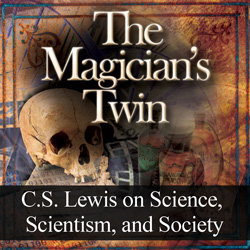 Editor’s Note: In contemplating the upcoming 50th anniversary of the death of C.S. Lewis, November 22, we present a series of excerpts from Center for Science & Culture associate director John West’s book The Magician’s Twin: C.S. Lewis on Science, Scientism, and Society (Discovery Institute Press). Dr. Larson is the Pulitzer Prize-winning author of Summer for the Gods: The Scopes Trial and America’s Continuing Debate Over Science and Religion, and other books.

Among other things, C.S. Lewis considered modern science a threat to freedom in modern society. In order to understand how modern science is a threat to freedom, we have to consider Lewis’s view of modern science. Lewis lived at a time when science was emerging as the dominant system of thought in the Western world, when the technological spin-offs of that intellectual activity were fundamentally transforming every aspect of life. Lewis reflected on this in his 1954 inaugural lecture at Cambridge University, when he declared:

The sciences long remained like a lion-cub whose gambols delighted its master in private; it had not yet tasted man’s blood. All through the eighteenth century… science was not the business of Man because Man had not yet become the business of science. It dealt chiefly with the inanimate; and it threw off few technological byproducts. When Watt makes his engine, Darwin starts monkeying with the ancestry of Man, and Freud with his soul, then indeed the lion will have got out of its cage.1

As we know from the Narnia tales, a free lion does not pose a threat so long as it is true — like Aslan. But Lewis did not view science as a source of neutral truths about nature. For example, in The Discarded Image, Lewis wrote about the differences between the medieval and modern model of nature: "The most spectacular differences between the Medieval Model and our own concern astronomy and biology. In both fields the new Model is supported by a wealth of empirical evidence.

But we should misrepresent the historical process if we said that the irruption of new facts was the sole cause of the alteration."2 According to Lewis, "The old astronomy was not, in any exact sense, ‘refuted’ by the telescope… The new astronomy triumphed not because the cause for the old became desperate, but because the new was a better tool."3 The same was true of the revolution in biology "from a devolutionary to an evolutionary scheme": "This revolution was certainly not brought about by the discovery of new facts… The demand for a developing world — a demand obviously in harmony both with the revolutionary and the romantic temper — grows up first; when it is full grown the scientists go to work and discover the evidence."4 Lewis made similar comments about the development of Darwinian evolution in "The Funeral of a Great Myth," where he concluded, "every age gets, within certain limits, the science it desires."5 Lewis noted that he did "not at all mean that these new phenomena are illusory," but he believed that "nature has all sorts of phenomena in stock and can suit many different tastes."6

Viewing modern science as a reflection of its age, rather than a method for finding truth, does not necessarily transform it into a threat to freedom. But Lewis’s dark foreboding about the direction of modern civilization inevitably cast a shadow over the sciences, which represent our civilization’s defining achievement.

Lewis was convinced that scientific authority would be used to justify and facilitate political oppression. In That Hideous Strength, Lewis observed, "The physical sciences, good and innocent in themselves, had already… begun to be warped, and been subtly maneuvered in a certain direction. Despair of objective truth had been increasingly insinuated into the scientists; indifference to it, and a concentration upon mere power, had been the result."7 For Lewis, the threat here is quite real. Commenting on this book, which is so damning of modern science, Lewis later wrote, "’scientists’ as such are not the target… what we are obviously up against throughout the story is not scientists but officials."8 This is an important distinction for Lewis. Scientific planning is not necessarily evil, "but ‘Under modern conditions any effective invitation to hell will certainly appear in the guise of scientific planning’ — as Hitler’s regime in fact did."9

Elaborating on this theme in his essay "Is Progress Possible?," Lewis concluded that "the new oligarchy must more and more base its claim to plan us on its claim of knowledge… This means they must increasingly rely on the advice of scientists."10 LEFT OFF HERE Lewis added that he "dread[ed] specialists in power because they are specialists speaking outside their special subjects. Let scientists tell us about science. But government involves questions about the good of man, and justice, and what things are worth having at what price; and on these a scientific training gives a man’s opinion no added value." This is why Lewis feared "government in the name of science. That is how tyrannies come in. In every age the men who want us under their thumb, if they have any sense, will put forward the particular pretension which the hopes and fears of that age render most potent… It has been magic, it has been Christianity. Now it will certainly be science."11

In this sense, Lewis perceived science as the ultimate threat to freedom in modern society.