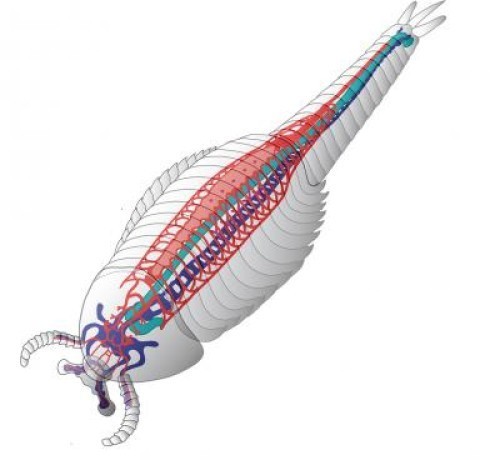 The AAAS would probably rather not aggravate the Cambrian explosion problem, but an item on its Science News site turns the thumbscrews on Darwin. The situation couldn’t get any worse for orthodox evolutionists than to find a "relatively advanced" blood delivery system in an animal that appears in the earliest layers of the Cambrian with no known primitive ancestors.

At first glance, the heart and blood vessels seemed simple. Then things got real complicated when they scientists publishing in Nature Communications took a closer look:

It was both modern and unsophisticated. A simple, tube-like heart was buried in the creature’s belly — or thorax — and shot single blood vessels into the 20 or so segments of its primitive body. In contrast, x-ray scans of the specimen revealed profoundly intricate channels in the head and neck. The brain was well supplied with looping blood vessels, which extended branches into the arthropod’s alien-like eyestalks and antennae and rivaled the complexity of today’s crustaceans. From this Gordian architecture, the researchers can now speculate about the critter’s lifestyle. Its brain required abundant oxygen, so it presumably did a fair amount of thinking. The ancient arthropod could likely peer around its murky marine environment, taking cues from a relatively advanced visual and sensory system, the researchers say. (Emphasis added.)

In the original paper, the authors suggest the tension this fossil creates for conventional evolutionary theory:

The addition of its vascular system to documented digestive and nervous systems resolves the internal organization of F. protensa as the most completely understood of any Cambrian arthropod, emphasizing complexity that had evolved by the early Cambrian.

By early Cambrian they mean early. It’s dated to 520 million years old — the onset of the Cambrian explosion.

Think what this means. The circulatory system is complex enough by itself, but it would have been useless without tight integration into all the other systems. The heart and blood vessels, composed of epithelial cells, support the visual and sensory system, composed of neurons and other types of cells. All these are integrated into a body plan where everything works together, allowing this arthropod to "peer around its murky marine environment" and make use of cues to find food (for its digestive system) and avoid predators (which requires locomotion). Needless to say, surviving also required sexual reproduction.

A scientific theory gains traction as repeated discoveries confirm its predictions, rather than tossing up a stream of anomalies that require auxiliary hypotheses to overcome. Confirmation is exactly the situation here. In Meyer’s book Darwin’s Doubt, he proposed intelligent design as the best explanation for the sudden appearance of integrated complex systems. You want a prediction, the kind you always hear that intelligent design doesn’t make?

You got it: There will be more such discoveries highlighting the problem of the missing Cambrian ancestors. And the more complex that newly uncovered creatures like this are found to be, the more Darwin deserves to be doubted and the better the case for intelligent design.