Some critics of the theory of intelligent design complain that ID makes unwarranted design inferences. While the critique is mistaken, it is at least not irrational. Clearly, the danger of “false positives” exists and ID researchers must guard against it. But so should scientists in other fields, notably paleoanthropologists who find a rock and leap to claim it as a “stone tool” fashioned by human ancestors.

As David Klinghoffer observed last week, scientists working in Kenya have identified what they say are the earliest stone tools. The identification depends on a design inference, and so it represents an implicit and welcome recognition that distinguishing design from unguided and blind processes — which is what intelligent design is all about — is a normal scientific activity. But in this case we must also ask whether the researchers applied ID properly.

Many of these finds may be true stone tools, but quite a few look like plain old rocks to me. For example: 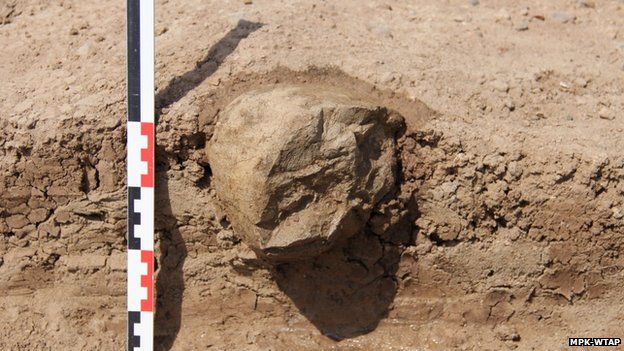 At best some of these tools seem to be on the level of what living apes are capable of using:

In the curriculum Discovering Intelligent Design, which now includes a free online component, we discuss how scientists make design inferences in a variety of fields, including archaeology:

Only an intelligent agent can use foresight to accomplish an end-goal — such as building a car or using written words to convey a message. Recognizing this unique ability of intelligent agents allows scientists in many fields to detect design.

Following such logic, design theorists ask a simple question: If we can detect design in other scientific fields, why should it be controversial when we detect it in biology or cosmology?

As we explain in Discovering ID, scientists must be careful when making design inferences. It’s not merely a subjective judgment nor is it a matter of gut instinct. Design proponents including William Dembski have developed the scientific basis for an objective determination. Some paleoanthropologists, however, seem a bit too eager to detect design in stone tools that may be nothing more than rocks.

Perhaps these researchers need a little more study on the subject. It seems to me they’d benefit from brushing up their mastery of the design inference. Our new online Discovering Intelligent Design curriculum would be a good place to start.