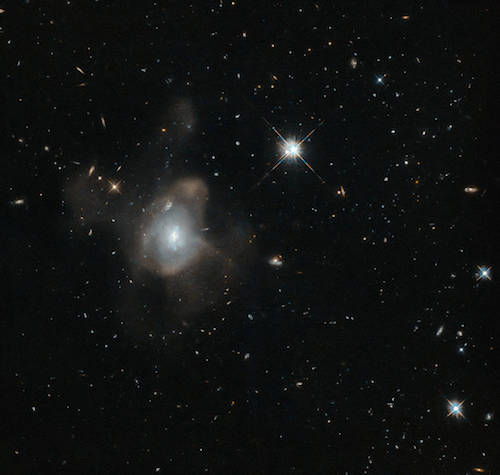 He raises an interesting possibility — that the object of perception may reach out to the subject, rather than the other way around. It has some explanatory power, to be sure, but issues can be raised: If perception still takes place at the sensory organ, one has no claim to knowledge about the external object, whether it reaches out or otherwise. Also, Aristotle’s notion of perception entails raising potency to act in the subject, not the object. “Reaching out” by the object seems to involve a similar motion in the object, which is difficult to understand in an inanimate object. It still seems to me that perception occurring (or at least beginning) at the object is the right way to understand it.

I’ve had some thoughts regarding Torley’s incisive thought problem — how perception of a supernova is to be understood when the distant star no longer exists. How can perception be squared with a relativistic universe, in which superluminal velocities are not permitted?

First some preliminaries. Perception must be an encounter with the object perceived. The Cartesian/Lockean view that we perceive only events in our sense organs and brain (that are stimulated by external objects) is untenable, because it is a reductio ad absurdum. If we directly perceive only objects within our skin, no knowledge of the external world is possible, and no science is possible — inferences about the real world are untestable. Even knowledge of our own mind is limited. We can’t use any empirical knowledge to understand ourselves. We can only use introspection. If we take the Cartesian/Lockean view seriously, “I think therefore I am” is the end of knowledge, as well as the beginning.

Chesterton appreciated the irony in solipsism:

A man wrote to say that he accepted nothing but Solipsism, and added that he had often wondered it was not a more common philosophy.

This is like saying that any textual or video knowledge we have of a foreign country that we have never set foot in, is not knowledge because we do not perceive the country directly.

Mapou confuses knowledge in the sense of intellection with knowledge in the sense of perception. We certainly can intellect things we have never physically visited — I understand the concept of the number 4, although I have never visited the number 4 (having no location, the number 4 would be difficult to visit anyway). But I can’t perceive an object without some kind of physical encounter with it. To use Mapou’s example, I can’t perceive France unless I visit France. I can intellect France — I can conceive of it with my intellect without visiting it, but I cannot perceive it unless I encounter it in the real world. In the Aristotelian paradigm, when I perceive France, I become, in a sense, a Frenchman. France becomes an aspect of who I am. Certainly I can only perceive France — I can only become a Frenchman, in the Aristotelian sense of grasping the form of France — by visiting France. One doesn’t become a Frenchman by reading a travel brochure.

Furthermore, if perception of France does not entail actually encountering France, then we have no way to know if France actually exists. If perception is not of real objects, how can we know anything outside of our skin? Inferences are meaningless if they cannot be tested against reality. How can one distinguish France from Atlantis, if perception is merely of things inside our skin?

So, solipsism being ruled out, let’s return to the question of perceiving a star that’s not there anymore. From a Cartesian view, all I’m seeing from the star is its light. The actual star is gone. So how can my perception of the star be of the star, if the star is gone, and only its light remains? I believe that there is a satisfactory answer to this paradox, within the Aristotelian paradigm.

We begin by asking: how do we know the star is no longer there? With Aristotle, there are two ways of knowing: perception and intellection. Perception entails a grasp of the sensible species (sensible form) of the object, and intellection entails grasp of the intelligible species. ‘Sensible’ and ‘intelligible’ may be distinguished roughly: perception is knowing that an object is; intellection is knowing what an object is. When we know a star, we use both ways of knowing. We perceive the star (we see that it is by our sense organs), and we intellect the star (we understand what it is by our reason).

So we genuinely perceive the star, even if it has exploded in a distant galaxy, because perception is bounded by relativistic constraints. We cannot perceive objects beyond the relativistic constraints of distance and time. By perception, the star does exist. By intellection, the star does not exist. Aristotle insisted, contra his predecessors (and many successors), that perception and intellection are different modes of knowing, and they do not lead to the same knowledge (cf. DA III.3,427A21).

And of course this dichotomy of perception and intellection regarding distance applies to all distances, not just interstellar distance. All of our perception is constrained by relativistic considerations — it takes light a measureable, if infinitesimal, time to reach us over inches, as well as over light years.

That is why we perceive a supernova, although we know it’s no longer there.