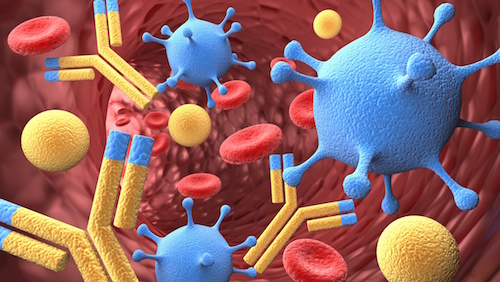 The body is constantly under attack from powerful microorganisms that, if given the chance, can cause serious infection and death. The body’s first layer of defense is the skin and epithelium that lines the respiratory, gastrointestinal, and genitourinary tracts. If the microbes get past these barriers they come up against the body’s immune system. The immune system can be divided into two parts.

In earlier articles I’ve shown how some of the immune cells and proteins of the innate system work together to defend the body from microbial attack. And in my immediately previous article I explored the immune cells of adaptive immunity: the lymphocytes, consisting of helper T-cells, which help other immune cells multiply and improve their killing ability; cytotoxic T-cells, which destroy infected host cells; and B-cells, each of whichproduces millions of identical antibodies. Now let’s look at how antibodies — the proteins of the adaptive immune system — work to help the body’s immune defense with extra intelligence, firepower, and precision accuracy.

Antibodies, also called immunoglobulins or gamma globulins,circulate in the blood as plasma proteins. When the first responders of innate immunity release chemicals to cause inflammation, this allows not only immune cells from the blood to come to the field of battle, but also proteins including immunoglobulins. Antibodies are good at helping other immune cells identify and kill bacteria, neutralizing toxins and limiting the effects of viruses before they can enter a cell. To understand how antibodies work, it is important to first look at their structure.

The antibody molecule consists of four chains of amino acids bonded to each other: two identical pairs of heavy and light chains joined together in the shape of a Y. The two connected heavy chains provide the basis of the Y-shaped structure while each light chain is connected to the outside of the branching portion of the heavy chain. The tips of the Y-shaped antibody molecule consist of the amino acids from the ends of each identical light and heavy chain. Together, they form a specific chemical pattern with a three-dimensional shape that is identical to the antigen receptors on the B-cell that produced them. These tips at the end of the antibody molecule act as antigen-binding sites and are known as the Fab portion (antigen binding fragment).

Human DNA is programmed to produce about one million different heavy chains and about ten thousand different light chains, each with their own unique amino acid pattern. Each B-cell produces only one specific antibody, made up of two pairs of identical heavy and light chains. That means that the body is able of make, as an estimate, over ten billion (one million times ten thousand) different antibodies, each with its distinct combination of binding sites. This gives the body a wide array of specific blood-borne sentries that can detect specific chemical patterns on different invading microbes. The amino acid structure that makes up the base of the Y-shaped antibody molecule remains constant and is called the Fc piece (constant fragment). It is the Fc piece that becomes activated after the Fab portions attach to the specific antigen and makes the antibodies ready for action.

There are a few ways that activated antibodies help the immune system defend the body from infection. As you may recall, the neutrophils and macrophages of the innate immune system have their own receptors that attach to large parts of foreign proteins on invading microorganisms. However, many pathogenic microbes have developed ways to evade detection and destruction by these phagocytic immune cells. They can often make themselves invisible, allowing them to multiply and spread throughout the body. When antibodies’ Fab portions attach to the specific antigens on the cell surface of the pathogens, they activate, and the pathogens lose the ability to evade and resist the neutrophils and macrophages. These immune cells have receptors on their surface that attach to the Fc piece of the antibody once it activates, allowing them to see and capture the pathogen. This activity is called enhanced attachment, or opsonization (opsonein, Greek: to buy food); the antibodies help phagocytes attach to microbes and literally make microbial food available to them.

Complement activation is another very important mechanism by which antibodies help kill microbes and infected host cells. As we saw previously, there are three different pathways that activate the complement system. The most efficient one requires a specific antibody to activate its Fc piece by attaching its Fab to a specific antigen on the cell surface of the microbe. Complement attaching to the activated Fc piece triggers the various other complement proteins. These swing into action and sometimes form the Membrane Attack Complex, which drills a hole in the membrane surrounding the microbe and kills it. Some of the fragments of activated complement (e.g., C3b) can attach themselves to microorganisms as well. Neutrophils and macrophages have receptors for C3b that allow them to identify and attach to the pathogen and kill it through opsonization.

In addition to enhanced attachment and complement activation, attaching antibodies to specific antigens on infected host cells activates NK (natural killer) cells.These attach to the activated Fc piece and, in a process called antibody-dependent cellular cytotoxicity (ADCC), release chemicals into the infected cell, causing its death. Moreover, both viruses and bacteria have specific structures on their outer surfaces that allow them to grab human cells and cause infection.

In prior articles I explained that the body’s immune system is irreducibly complex, because not only are the innate and adaptive immune systems each needed for survival, but each of their respective components is as well. It also demonstrates natural survival capacity, for our earliest ancestors could never have survived long enough to reproduce if they hadn’t had enough properly working first responder immune cells in their tissues, or neutrophils and complement in their blood, or T-cells in their lymphatic systems to prevent infection. So what about antibodies?

Primary immunodeficiencies are genetic conditions a person is born with that result in a poor immune response to infection. One example involves defective B-cell function and an almost total absence of antibodies, called Agammaglobulinemia. Infants receive temporary immunity from their mothers by antibodies crossing through the placenta into their bloodstream. However, after six months, they start to have infections which, if it weren’t for modern medicine, would quickly lead to death. This shows that even if our earliest ancestors had had all of the other parts of the immune system working properly, without antibodies, they would never have survived.

Finally, it’s important to realize that just like the coagulation cascade and the complement system, this system must turn on only when needed and stay or turn off when not. When antibodies cause the body to overreact to itself or to relatively harmless antigens, this can lead to major debility and even death. Some allergies, such as hay fever and asthma, are caused by certain antibody responses to pollens. When applied to venom from a bee sting, such overreactions can cause anaphylactic shock. When antibodies react inappropriately to normal tissue and turn on the immune system in what is called autoimmune disease, this leads to inflammation, injury, and destruction of different tissues and organs. It’s vital not only that all of the components of the immune system be present, but that they be properly controlled.

On December 14, 1799, George Washington was suffering from a severe case of tonsillitis. The theory of the day was that infections were caused by the presence of ill humors in the blood that must be treated by bloodletting. Over several hours, in the midst of an acute infection, his medical attendants removed about five pints of blood. Modern medical practitioners know that infections are caused by germs, not ill humors, and that bleeding someone who has an acute infection is not only likely to cause further weakness but possibly even death.

Even though microbes had been observed under the microscope for almost two hundred years, it was not until the late 19th century that medical science began to recognize that specific germs cause specific diseases. And it was not until Louis Pasteur disproved the theory of spontaneous generation (the belief that life could originate from inanimate matter) that medical science realized that many infectious diseases were indeed preventable.

Clearly, when it came to the understanding of infections, the medical profession of George Washington’s day was in error. Moreover, their misguided notions of what caused disease led them to apply the standard treatment of the day (bloodletting), which likely contributed to his death.

This demonstrates how a strongly held, but erroneous, idea can lead to certain assumptions and actions that are detrimental to human development and prosperity. In other words, ideas have consequences. As presented by today’s evolutionary biologists, the dominant theory of how life came into being would appear to involve a type of spontaneous generation called abiogenesis. The current thinking is that inanimate matter (chemical elements), under the influence of chance and the laws of nature alone, eventually became multi-system organisms with complex body plans, like us. For vertebrates such as fish, birds, reptiles, amphibians, and mammals, this means that the immune response needed for survival, as described in previous articles, arose solely by these processes.The consequences of this strongly held, but erroneous, idea are pervasive within our culture and affect almost every aspect of human endeavor.

Next time, we’ll begin to look at the digestive system and how the body acquires what it needs to live, grow, and work properly.