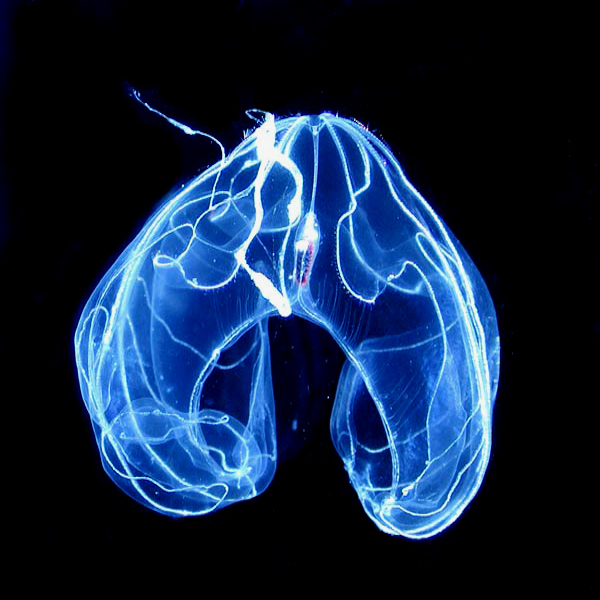 The comb jelly, or ctenophore, is a curious animal. It looks like a spaceship with flashing lights. Where did it come from? Evolutionists need to cram this phylum, consisting of about 200 extant species, into their Darwinian tree of common descent. But it doesn’t fit. They would prefer to put sponges as the common ancestor, because sponges look a lot simpler than comb jellies, which possess neurons, muscles, and a gut. But other evidence puts ctenophores at the root.

This would mean that sponges evolved from ctenophores, and lost some of their complex traits. Obviously, that is a less palatable solution.

Science works on the frontier between knowledge and ignorance. We’re not afraid to admit what we don’t know. There’s no shame in that. The only shame is to pretend that we have all the answers.

Indeed. With Nicole King, Rokas explores the mystery and concludes: We don’t know which animal came first, and that’s good.

We last observed Rokas, a Vanderbilt University biologist, proposing a new explanation for the Cambrian explosion. He did so with an implausible story of how comb jellies began building organs on a collagen scaffold without a blueprint. “This key innovation, which made possible the rich diversity of life on earth, is found in the most ancient of currently living animals — the ctenophore,” he said. Proponents of the ctenophore-first theory, Rokas and King have to admit that not all the evidence fits their interpretation.

An early example of using phylogenomics to address long-standing questions about the animal tree came in 2008, with the first study suggesting that ctenophores — not sponges — were the sister lineage to the rest of the animals. Since then, more than a dozen conflicting phylogenomic analyses have offered support for the ctenophores-sister hypothesis, the sponges-sister hypothesis or, much more rarely, neither (Figure 2). [Emphasis added.]

A “sister lineage,” the comb jellies would then trace their roots to a universal common ancestor prior to sponges. As a consequence, evolutionists would need to appeal to “convergent evolution” for the origin of some complex traits found in ctenophores.

One recent hypothesis focuses on the differences and suggests that neurons in ctenophores, cnidarians and bilaterians might have evolved convergently rather than being homologous cell types that evolved through descent from a common ancestor.

But while they are making up stories, they can just call up the specters of imagination to fill in the blanks:

When you see “seemingly more likely scenario” it’s worth asking who finds it more likely. Consider what this scenario requires. What constitutes a “rudimentary” nervous system? Rokas and King list the requirements: genetic and cellular building blocks, including neurons. Is it likely neurons appeared by blind, unguided processes? The collagen he proposed in his earlier paper is one of those building blocks, but neurons are much more daunting “innovations” to explain.

For instance, Herbert et al. in PNAS found that proper neural function depends on the motor complex of dynein and dynactin moving in a “paradoxically” unusual way. Dynein motors normally move in the retrograde direction, as opposed to kinesin motors, which move in the anterograde direction. Neurons, however, need the messenger RNAs for myelin moved out to the periphery of the cell for translation. They found in the oligodendrocytes of zebrafish (with evidence this also occurs in humans) that dynein/dynactin complexes achieve this anterograde delivery. Bad things happen when this function is mutated, they show. The paper describes many other genes and proteins that make neurons work.

Whether or not the well-balanced system applies to invertebrates, the point is that neurons are not simple. To conduct electrical signals, they have motors, trackways, and networks of parts working together. Dynactin (dynein activator complex), for example, is “a multi-subunit protein found in eukaryotic cells that aids in bidirectional intracellular transport by binding to dynein and kinesin-2 and linking them to the organelle or vesicle to be transported” (Wikipedia). A hint of the effectiveness of neurons in comb jellies can be gained by watching how quickly they move their cilia, flash their colorful lights, and move through the water. How “rudimentary” can a nervous system get to function at all?

Ancestral state reconstruction shows that the most recent common ancestor of extant ctenophores was pelagic, possessed tentacles, was bioluminescent and did not have separate sexes. Our results imply at least two transitions from a pelagic to benthic lifestyle within Ctenophora, suggesting that such transitions were more common in animal diversification than previously thought.

Surely it baffles logic to multiply the requirements for innovations when you already have big ones to explain. In addition to nerves, ctenophores have muscles:

Putative ctenophore fossils date back to the Ediacaran Period and substantial morphological diversity is present in the Cambrian. All ctenophores possess smooth muscles, and at least one genus, Euplokamis, has striated muscles.

(Note: the claim about Ediacaran appearance relies on interpretation of one fossil as having some external similarities to comb jellies; see here). The authors realize that the complexity of comb jellies represents a challenge to evolution:

The debate surrounding the phylogenetic placement of Ctenophora has complicated studies on the evolution of complex characters such as muscles and neurons.

See Phys.org for a summary of Whelan et al.’s paper, which describes the problem simply:

“If sponges are secondarily simplified, it means they are probably kind of weird, and may not tell us as much about ourselves as we previously thought,” Kocot said.

So how does Rokas “embrace the uncertainty” that these issues create? After delineating the history of the controversy, he gives some reasons why phylogenies can be hard to reconstruct. Puzzling over contradictions in the genomic data, and wishing for more genomes to compare, he ends with this possibility:

Finally, our desire for a neatly bifurcating tree may mask the true history of early branching animal phyla. It is possible that more complex phylogenetic scenarios involving hybridization, introgression or incomplete lineage sorting (Box 1) were part of the early diversification of animals (Figure 2), even though these processes cannot be robustly detected using existing data and methods. This would imply that the evolutionary history of traits encoded by genes that experienced any of these processes may be genuinely different from that implied by the species phylogeny, regardless of whether sponges or ctenophores are the sister lineage.

A better statement of desire producing myth could hardly be found. And yet it’s important to the Darwinians to keep trying:

While reconstructing the relationships among animal phyla is a formidable challenge, it is essential for understanding the origins of modern animals and the evolutionary processes that gave rise to their diversity….

To unravel the evolutionary history of complex traits, such as the nervous system, we must not only resolve the animal phylogeny, but also test our assumptions about trait homology at multiple levels (i.e., genetic, cellular ultrastructure, and system function) by trying to understand the molecular and cellular mechanisms that give rise to these traits in diverse animals.

Weren’t we all taught that neo-Darwinism provided the mechanism that gives rise to traits? Wasn’t it mutations and natural selection? Without a firm answer, Rokas and King offer the typical evolutionary promissory notes.

While we concur with the sentiment in the opening quote that “we’re not afraid to admit what we don’t know” and we revel in the insights that are currently possible regarding the dawn of animal life (Figure 3), we eagerly anticipate future breakthroughs that will allow us to move from ignorance to knowledge in our quest to reconstruct the origin of animals.

Whatever happens, the next story will be evolutionary, because that’s the only class of explanation allowed in today’s materialistic environment. No intelligence allowed. Neurons, muscles, and dyneins had to pop into existence somehow. “Science is an iterative and evolutionary process,” they say.

Darwin marches on. Yet a genuine move from ignorance to knowledge may require taking seriously Rokas and King’s admission that “our desire for a neatly bifurcating tree may mask the true history of early branching animal phyla.” Time to take the mask off.