Proteins are the building blocks of life. They are the structural parts that give cells shape, the enzymes that build or break down the molecules of life, the motors that transport things, the agents that send signals and regulate the activity of other proteins and genes, and the morphogens that help determine the development of the organism.
What determines a protein’s activity and properties? Its shape. And what determines its shape? The way its one-dimensional string of amino acids folds together. This is a complex process involving many interactions, so complex that we cannot reliably predict a protein’s structure based on its sequence.
To get an idea of the problem, take a look at the picture above, the figure on the left. This is an illustration of a single protein called porin, whose structure has been determined experimentally. This protein has around 300 amino acids. What you see here is the arrangement of all its covalent bonds between atoms, shown as sticks.
Making sense of that tangle of bonds is difficult. So scientists often depict proteins in a simplified cartoon form that shows the secondary structure of the protein fold. These secondary structures are motifs within the protein that form either alpha helical coils or flat beta sheets, and are therefore drawn as coils or flat arrows in cartoon illustrations. The middle picture above shows porin, in the same orientation and size as the picture on the left, but now drawn in cartoon form. Porin is composed mostly of antiparallel beta sheets, arrayed in a barrel-like shape, with an opening in the center.
But neither of these pictures illustrates porin as it would look if we could take a snapshot. The figure above on the right is a surface view of porin, showing its many knobs and hollows and a hole in the middle. Those knobs and hollows allow porin to assemble in its final functional form in the membrane, a trimer composed of three porin chains tightly coupled together. The image below is of trimeric sucrose-specific porin found in E coli. The artist has rendered it so that we can see the secondary structure within the assembled trimer, and it is colored as a rainbow according to the threading of the amino acid chains, from first (blue) to last (red). 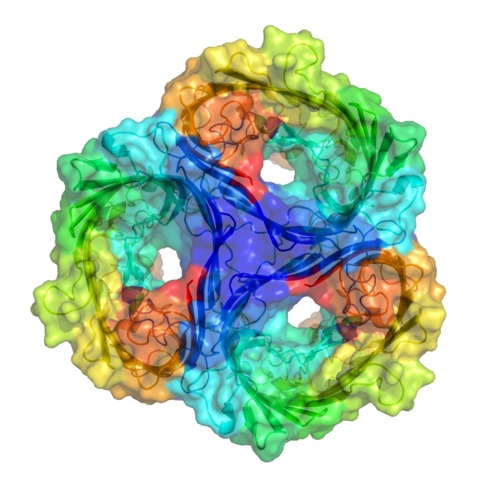 What does porin do? It serves as a pore to let specific molecules enter the periplasmic space of bacteria. The pore has to have a specific shape and polarity to allow the right chemicals admittance, but exclude others, and the outside of the protein has to be able to interact stably either with other porins or with the membrane. That all depends on the information contained in porin’s primary sequence.
Research indicates that sequences that fold into a particular functional shape are rare. Only about 1 in 10^77 possible sequences will adopt a functional fold 150 amino acids in length. How rare is porin as a functional sequence? Based on its functional constraints, it is probably as rare as the enzymatic fold already tested.
My point? Proteins exhibit exquisite design, with extraordinary specified complexity embedded in their sequences. Too much to be the result of random processes.
Cross-posted at Biologic Perspectives.