[Editor’s Note: This is slide 14 in a series of 14 slides available at JudgingPBS.com, a new website featuring “Darwin’s Failed Predictions,” a response to PBS-NOVA’s online materials for their “Judgment Day: Intelligent Design on Trial” documentary.] 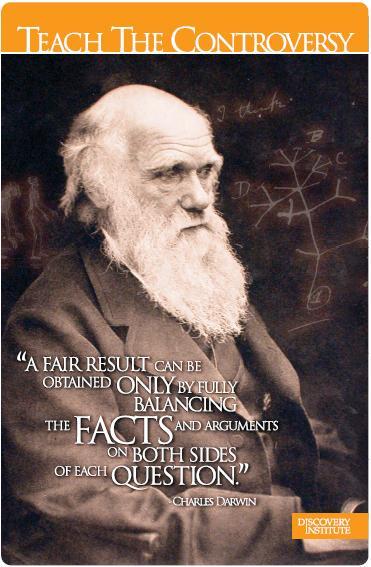 PBS presents a thoroughly pro-Darwin only account of the debate over evolution. In fact, there are many reasons why we should teach the controversy over Darwinian evolution:

(1) Congress supports such a policy:
“The Conferees recognize that a quality science education should prepare students to distinguish the data and testable theories of science from religious or philosophical claims that are made in the name of science. Where topics are taught that may generate controversy (such as biological evolution), the curriculum should help students to understand the full range of scientific views that exist, why such topics may generate controversy, and how scientific discoveries can profoundly affect society.”1

(2) The United States Supreme Court has sanctioned such a policy:
“We do not imply that a legislature could never require that scientific critiques of prevailing scientific theories be taught.”2

In Origin of Species, Darwin stated, “A fair result can be obtained only by fully stating and balancing the facts and arguments on both sides of each question.”3

PBS’s propaganda doesn’t even employ the approach that Darwin himself purportedly recommends. Viewers of PBS’s “Judgment Day: Intelligent Design on Trial” documentary will do well to learn about both sides of this debate.

For more information on problems with PBS-NOVA’s “Judgment Day: Intelligent Design on Trial” documentary, please see any of the following links: