[Editor’s Note: This is slide 9 in a series of 14 slides available at JudgingPBS.com, a new website featuring “Darwin’s Failed Predictions,” a response to PBS-NOVA’s online materials for their “Judgment Day: Intelligent Design on Trial” documentary.]

PBS asserts that “shared amino acids” in genes common to many types of organisms indicate that all life shares a common ancestor. Intelligent design is not necessarily incompatible with common ancestry, but it must be noted that intelligent agents commonly re-use parts that work in different designs. Thus, similarities in such genetic sequences may also be generated as a result of functional requirements and common design rather than by common descent. 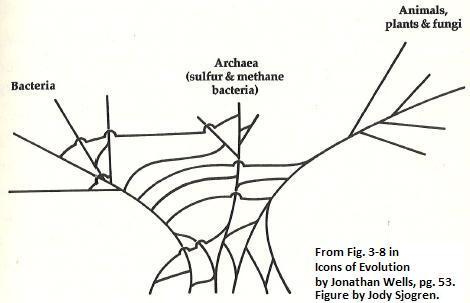 In fact, PBS’s statement is highly misleading. Darwin’s tree of life–the notion that all living organisms share a universal common ancestor–has faced increasing difficulties in the past few decades. Phylogenetic trees based upon one fundamental gene or protein often conflict with trees based upon another gene or protein. In fact, this problem is particularly acute when one studies the “ancient” genes at the base of the tree of life, which PBS wrongly claims demonstrate universal common ancestry. As W. Ford Doolittle explains, “[m]olecular phylogenists will have failed to find the ‘true tree,’ not because their methods are inadequate or because they have chosen the wrong genes, but because the history of life cannot properly be represented as a tree.”1

Doolittle, a Darwinian biologist, elsewhere writes that “there would never have been a single cell that could be called the last universal common ancestor.”2 Doolittle attributes his observations to gene-swapping among microorganisms at the base of the tree. But Carl Woese, the father of evolutionary molecular systematics, finds that such problems exist beyond the base of the tree: “Phylogenetic incongruities [conflicts] can be seen everywhere in the universal tree, from its root to the major branchings within and among the various taxa to the makeup of the primary groupings themselves.”3

Looking higher up the tree, a recent study conducted by Darwinian scientists tried to construct a phylogeny of animal relationships but concluded that “[d]espite the amount of data and breadth of taxa analyzed, relationships among most [animal] phyla remained unresolved.”4 The basic problem is that phylogenetic trees based upon one gene or other characteristic will commonly conflict with trees based upon another gene or macro-characteristic. Indeed, the Cambrian explosion, where nearly all of the major living animal phyla (or basic body plans) appeared over 500 million years ago in a geological instant, raises a serious challenge to Darwinian explanations of common descent.

The nice, neat, nested hierarchy of a grand Tree of Life predicted by Darwinian theory has not been found. Evolutionary biologists are increasingly appealing to epicycles like horizontal gene transfer, differing rates of evolution, abrupt molecular radiation, convergent evolution (even convergent molecular evolution), and other ad hoc rationalizations to reconcile discrepancies between phylogenetic hypothesis. Darwinian biology is not explaining the molecular data; it is forced to explain away the data. PBS paints a rosy picture of the data, when the data isn’t good news for Darwinism.