[Editor’s Note: This is slide 12 in a series of 14 slides available at JudgingPBS.com, a new website featuring “Darwin’s Failed Predictions,” a response to PBS-NOVA’s online materials for their “Judgment Day: Intelligent Design on Trial” documentary.] 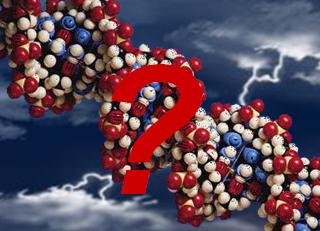 If, as Slide 11 suggests, human origins are a mystery to Darwinian scientists, the chemical origin of life presents a far greater challenge. As Gregg Easterbrook recently wrote in Wired Magazine, “What creates life out of the inanimate compounds that make up living things? No one knows. How were the first organisms assembled? Nature hasn’t given us the slightest hint. If anything, the mystery has deepened over time.”1

Origin of life theorists have struggled simply to account for the origin of pre-biological organic chemicals on the early earth, with little success. So drastic is the evidence against pre-biotic synthesis, that in 1990 the Space Studies Board of the National Research Council recommended that origin of life scientists undertake a “reexamination of biological monomer synthesis under primitive Earthlike environments, as revealed in current models of the early Earth.”2 But this is only the beginning of the problem, as leading origin of life theorist Stanley Miller once admitted that “making compounds and making life are two different things.”3

When trying to “make” the first life-form, scientists cannot rely upon Darwinian processes. Darwinian evolution requires replication, and prior to the origin of life there was no replication. Origin of life theorist Arthur Shapiro explains that an explanation for the first self-replicating molecule “has not yet been described in detail or demonstrated” but “is taken for granted in the philosophy of dialectical materialism.”4

Accounting for the origin of a self-replicating molecule would still not explain how modern cells arose. Our DNA code requires an irreducibly complex system requiring the information in DNA, the enzymes that assist DNA’s replication and protection, a protective cell membrane, and a complex system of machinery used to transcribe and translate language of DNA into protein. Faced with the complexity of this system, biologist Frank Salisbury lamented in 1971 that “the entire system must come into being as one unit, or it is worthless. There may well be ways out of this dilemma, but I don’t see them at the moment.”5

In 1995, leading biologists John Maynard Smith and Eors Szathmary explained that accounting for the origin of this system remains “perhaps the most perplexing problem in evolutionary biology” because “the existing translational machinery is at the same time so complex, so universal and so essential that it is hard to see how it could have come into existence or how life could have existed without it.”6

Scientists may one day create life in the lab. But they will have done so using intelligent design. The theory that life could have originated via blind natural chemical processes relying upon sheer dumb luck remains unexplained.

References Cited:
1. Gregg Easterbrook, “Where did life come from?,” Wired Magazine, page 108 (February, 2007).
2. National Research Council Space Studies Board, The Search for Life’s Origins (National Academy Press: Washington D.C., 1990).
3. Statements made by Stanley Miller at a talk given by him for a UCSD Origins of Life seminar class on January 19, 1999.
4. Robert Shapiro, Origins: A Skeptics Guide to the Creation of Life on Earth, page 207 (Summit Books, 1986).
5. Frank B. Salisbury, “Doubts about the Modern Synthetic Theory of Evolution,” page. 338, American Biology Teacher (September, 1971).
6. John Maynard Smith and Eors Szathmary, The Major Transitions in Evolution, page. 81 (W.H. Freeman, 1995).