[Editor’s Note: This is slide 13 in a series of 14 slides available at JudgingPBS.com, a new website featuring “Darwin’s Failed Predictions,” a response to PBS-NOVA’s online materials for their “Judgment Day: Intelligent Design on Trial” documentary.] 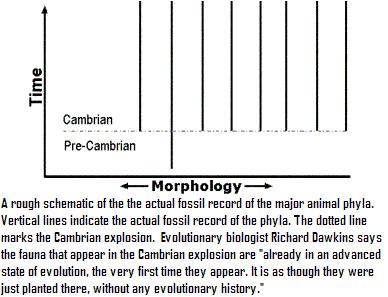 PBS has a slide stating that evolutionary paleontologists “continue to unearth key fossils that bridge those gaps Darwin bemoaned.” But evolutionary paleontologist David Raup wrote in 1979 that “we are now about 120 years after Darwin, and knowledge of the fossil record has been greatly expanded … ironically, we have even fewer examples of evolutionary transition than we had in Darwin’s time.”1 PBS asserts that fossils discovered in the “past half century” have “filled in” gaps to explain the Cambrian explosion in evolutionary terms. Yet a textbook published just six years ago acknowledges that the fossil record has not given clues to help explain the origin of animal phyla in the Cambrian explosion:

“Most of the animal phyla that are represented in the fossil record first appear, ‘fully formed,’ in the Cambrian some 550 million years ago…The fossil record is therefore of no help with respect to the origin and early diversification of the various animal phyla.”2

This phenomenon exists not only at the species level but also at the level of higher taxa, as one zoology textbook discusses:

“Many species remain virtually unchanged for millions of years, then suddenly disappear to be replaced by a quite different, but related, form. Moreover, most major groups of animals appear abruptly in the fossil record, fully formed, and with no fossils yet discovered that form a transition from their parent group.”4

Rather than acknowledging the general pattern of explosions in the fossil record, PBS focuses on the few occasions where there are possible transitional forms. PBS focuses on Tiktaalik, an alleged transition between fish and amphibians, but Tiktaalik has a completely finlike fin and does virtually nothing to document the key aspect of the alleged fish to amphibian transition, the transformation of fins into feet.

PBS also cites Archaeopteryx as an alleged transition between dinosaurs and birds. But Archaeopteryx is generally regarded as a true bird, and its alleged dinosaurian ancestors are only known from one locality–the Yixian formation in China–which is “at least 20 Myr younger than Archaeopteryx.”5 If Archaeopteryx is the first known true bird, then from what, if anything, did birds evolve? The fossil record does not tell us. Despite the problems with this evolutionary story, Phillip Johnson provides a lucid and charitable analysis of the importance of this fossil:

“Archaeopteryx is on the whole a point for Darwinists, but how important is it? Persons who come to the fossil evidence as convinced Darwinists will see a stunning confirmation, but skeptics will see a lonely exception to a consistent pattern of fossil disconfirmation.”6