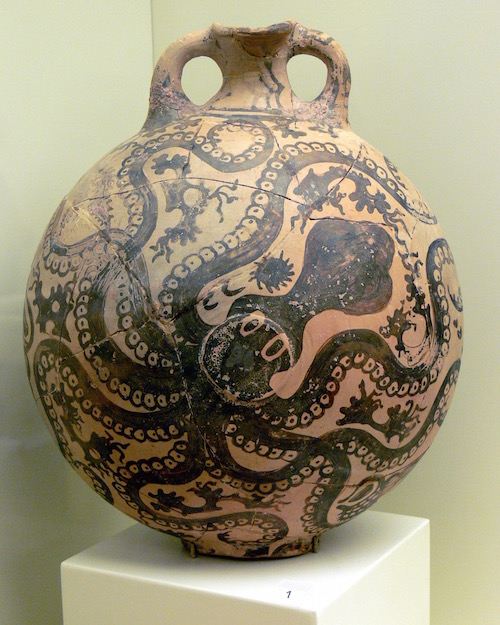 These days, new genomes of different types of organisms are being sequenced and published on a regular basis. When some new genome is sequenced, evolutionary biologists expect that it will be highly similar to the genomes of other organisms that are assumed to be closely related.

As ENV already noted, the latest organism to have its genome sequenced has confounded that expectation: the octopus, whose genome was recently reported in Nature. It turns out to be so unlike other mollusks and other invertebrates that it’s being called “alien” by the scientists who worked on that project.

One article on the subject was titled “Don’t freak out, but scientists think octopuses ‘might be aliens’ after DNA study“:

Not to send you into a meltdown or anything but octopuses are basically ‘aliens’ — according to scientists.

Researchers have found a new map of the octopus genetic code that is so strange that it could be actually be an “alien”.

“The octopus appears to be utterly different from all other animals, even other molluscs, with its eight prehensile arms, its large brain and its clever problem-solving abilities,” said US researcher Dr Clifton Ragsdale, from the University of Chicago.

Analysis of 12 different tissues revealed hundreds of octopus-specific genes found in no other animal, many of them highly active in structures such as the brain, skin and suckers.

Obviously no one thinks the octopus is an “alien” from another planet. (Nature News quotes one co-author of the paper on the genome noting that the alien quip is a “joke.”) But it certainly is alien to standard evolutionary expectations that genomes of related species ought to be highly similar. Thus, Nature points out the large number of unique genes found in the octopus genome:

Surprisingly, the octopus genome turned out to be almost as large as a human’s and to contain a greater number of protein-coding genes — some 33,000, compared with fewer than 25,000 in Homo sapiens.

This excess results mostly from the expansion of a few specific gene families, Ragsdale says. One of the most remarkable gene groups is the protocadherins, which regulate the development of neurons and the short-range interactions between them. The octopus has 168 of these genes — more than twice as many as mammals. This resonates with the creature’s unusually large brain and the organ’s even-stranger anatomy. …

A gene family that is involved in development, the zinc-finger transcription factors, is also highly expanded in octopuses. At around 1,800 genes, it is the second-largest gene family to be discovered in an animal, after the elephant’s 2,000 olfactory-receptor genes.

The analysis also turned up hundreds of other genes that are specific to the octopus and highly expressed in particular tissues. The suckers, for example, express a curious set of genes that are similar to those that encode receptors for the neurotransmitter acetylcholine. The genes seem to enable the octopus’s remarkable ability to taste with its suckers.

Scientists identified six genes for proteins called reflectins, which are expressed in an octopus’s skin. These alter the way light reflects from the octopus, giving the appearance of a different colour — one of several ways that an octopus can disguise itself, along with changing its texture, pattern or brightness.

The technical paper explains that the octopus genome reveals “massive expansions in two gene families previously thought to be uniquely enlarged in vertebrates: the protocadherins, which regulate neuronal development, and the C2H2 superfamily of zinc-finger transcription factors.” Moreover:

We identified hundreds of cephalopod-specific genes, many of which showed elevated expression levels in such specialized structures as the skin, the suckers and the nervous system.

They conclude: “Our analysis suggests that substantial expansion of a handful of gene families, along with extensive remodelling of genome linkage and repetitive content, played a critical role in the evolution of cephalopod morphological innovations, including their large and complex nervous systems.” In other words, the cephalopod genome is unusual in many major respects, unlike other organisms we’ve sequenced.

Actually, that’s not completely correct. There are some peculiar similarities between the cephalopod genome and something else they’ve seen — but they aren’t the kind of similarities that were predicted by common descent. The technical papers notes that the cephalopod genome bears unexpected resemblance in certain respects to vertebrate genomes — and since these similarities aren’t predicted by common descent, they predictably attribute them to convergent evolution:

the independent expansions and nervous system enrichment of protocadherins in coleoid cephalopods and vertebrates offers a striking example of convergent evolution between these clades at the molecular level.

Indeed, even within cephalopods they found evidence of convergent evolution (i.e., genetic similarity that didn’t fit the expectations of common descent): “Surprisingly, our phylogenetic analyses suggest that the squid and octopus protocadherin arrays arose independently. Unlinked octopus protocadherins appear to have expanded ~135 Mya, after octopuses diverged from squid.”

But the big story here is the large number of unique genes found in the octopus genome. The technical paper elaborates on one of these major gene groups:

The octopus genome encodes 168 multi-exonic protocadherin genes, nearly three-quarters of which are found in tandem clusters on the genome (Fig. 2b), a striking expansion relative to the 17-25 genes found in Lottia [a limpet], Crassostrea gigas (oyster) and Capitella [polychaete worm, and annelid] genomes.

The paper doesn’t even try to speculate about how these unique cephalopod genes might have arisen. The standard view — that new genes originate via gene duplication — is hardly mentioned. But invoking gene duplication requires one to find another gene elsewhere that’s similar. Given that cephalopods apparently have many unique genes not similar to genes found in other organisms, gene duplication might not be a candidate explanation in many of these cases. One wonders if future investigators will resort to “de novo” gene origin.

Remember: ORFans, by definition, have no homologs. These genes are unique — one of a kind — a fact tacitly acknowledged by the increasing number of evolutionary biologists who attempt to “explain” the origin of such genes through de novo (“out of nowhere”) origination.

Many other papers invoke de novo origination of genes. Long mentions, for example, a study seeking to explain the origin of an antifreeze protein in an Antarctic fish that cites “de novo amplification of a short DNA sequence to spawn a novel protein with a new function.” Likewise, Long cites an article in Science to explain the origin of two human genes involved in neurodevelopment that appealed to “de novo generation of building blocks — single genes or gene segments coding for protein domains,” where an exon spontaneously “originated from a unique noncoding sequence.” Other papers make similar appeals. A paper in 2009 reported “the de novo origin of at least three human protein- coding genes since the divergence with chimp[s],” where each of them “has no proteincoding homologs in any other genome.” An even more recent paper in PLoS Genetics reported “60 new protein- coding genes that originated de novo on the human lineage since divergence from the chimpanzee,” a finding that was called “a lot higher than a previous, admittedly conservative, estimate.”

Another 2009 paper in the journal Genome Research was appropriately titled “Darwinian Alchemy: Human Genes from Noncoding RNA.” It investigated the de novo origin of genes and acknowledged, “The emergence of complete, functional genes — with promoters, open reading frames (ORFs), and functional proteins — from ‘junk’ DNA would seem highly improbable, almost like the elusive transmutation of lead into gold that was sought by medieval alchemists.” Nonetheless, the article asserted without saying how that: “evolution by natural selection can forge completely new functional elements from apparently nonfunctional DNA — the process by which molecular evolution turns lead into gold.”

The presence of unique gene sequences forces researchers to invoke de novo origin of genes more often than they would like. After one study of fruit flies reported that “as many as ~12% of newly emerged genes in the Drosophila melanogaster subgroup may have arisen de novo from noncoding DNA,” the author went on to acknowledge that invoking this “mechanism” poses a severe problem for evolutionary theory, since it doesn’t really explain the origin of any of its “nontrivial requirements for functionality.” The author proposes that “preadaptation” might have played some role. But that adds nothing by way of explanation, since it only specifies when (before selection played a role) and where (in noncoding DNA), not how the genes in question first arose. Details about how the gene became “preadapted” for some future function is never explained. Indeed, evolutionary biologists typically use the term “de novo origination” to describe unexplained increases in genetic information; it does not refer to any known mutational process. (Darwin’s Doubt, pp. 216, 220-221.)

In other words, de novo isn’t an explanation at all. It’s more like a magic wand to be invoked when evolutionary biologists encounter some unique gene and they have no way to explain its origin via duplication from a similar pre-existing gene. (As an evolutionary mechanism, gene duplication has its own issues.)

Nonetheless, a recent article in Quanta Magazine points out just how many recent scientific studies have resorted to calling upon de novo origin of genes:

For most of the last 40 years, scientists thought that this was the primary way new genes were born — they simply arose from copies of existing genes. The old version went on doing its job, and the new copy became free to evolve novel functions.

Certain genes, however, seem to defy that origin story. They have no known relatives, and they bear no resemblance to any other gene. They’re the molecular equivalent of a mysterious beast discovered in the depths of a remote rainforest, a biological enigma seemingly unrelated to anything else on earth.

The mystery of where these orphan genes came from has puzzled scientists for decades. But in the past few years, a once-heretical explanation has quickly gained momentum — that many of these orphans arose out of so-called junk DNA, or non-coding DNA, the mysterious stretches of DNA between genes. “Genetic function somehow springs into existence,” said David Begun, a biologist at the University of California, Davis.

If the idea that “Genetic function somehow springs into existence” doesn’t sound compelling to you, join the club. But that’s about as much detail as you’re likely to get from proponents of de novo gene origination. One proponent of this idea in the article is even quoted saying: “It’s hard to see how to get a new protein out of random sequence when you expect random sequences to cause so much trouble.” Unfortunately for evolutionists, this problem seems to be common among animals, as the Quanta article continues:

This metamorphosis was once considered to be impossible, but a growing number of examples in organisms ranging from yeast and flies to mice and humans has convinced most of the field that these de novo genes exist. Some scientists say they may even be common. Just last month, research presented at the Society for Molecular Biology and Evolution in Vienna identified 600 potentially new human genes. “The existence of de novo genes was supposed to be a rare thing,” said Mar Albà, an evolutionary biologist at the Hospital del Mar Research Institute in Barcelona, who presented the research. “But people have started seeing it more and more.”

Whenever you see “de novo” origin of a gene invoked, you know that evolutionary biologists lack any explanation for how that gene arose. Scientists haven’t had much time yet to analyze the cephalopod genome, but given early reports of many unique genes, it will be interesting to learn to what extent they are forced to invoke these mysterious processes — what amounts to evolution ex nihilo — to explain how this “alien” genome arose.