swimming for hours with widely open mouth, thus catching, like a whale, insects in the water. Even in so extreme a case as this, if the supply of insects were constant, and if better adapted competitors did not already exist in the country, I can see no difficulty in a race of bears being rendered, by natural selection, more and more aquatic in their structure and habits, with larger and larger mouths, till a creature was produced as monstrous as a whale.1

Critics laughed at this, and Darwin removed it from later editions of his book, though he continued privately to believe it. Yet it would take a lot more than an enlarged mouth to turn a bear into a whale.

Some land mammals spend a great deal of time in the water. They include seals, sea lions, and otters. But these creatures are not fully aquatic; it would be more accurate to call them amphibious. By contrast, whales, dolphins, and porpoises spend their entire lives in the water. Although dolphins occasionally lunge up onto a beach in pursuit of prey, they will die if they don’t quickly return to the water.

Whales, dolphins and porpoises are collectively called cetaceans (sĕ-TAY-shuns), from the Latin word for whale. To judge from the fossil record, land mammals existed before cetaceans. But did the former evolve into the latter, as Darwin believed? For Darwin, the process would have been gradual: Each animal along the way would have been distinguished from its parents “by differences not greater than we see between the varieties of the same species at the present day.”2 Furthermore, the process would have been undesigned: “There seems to be no more design in the variability of organic beings, and in the action of natural selection, than in the course which the wind blows.”3

What would it take to turn a land mammal into a whale? The list is actually quite long, but we can focus just on breathing, swimming, and reproducing.

Like all mammals, cetaceans breathe air, but they must do so while being almost fully submerged. So cetaceans have nostrils on the tops of their heads, called “blowholes” because at the surface they blow moisture-laden air out of them. Blowholes are unusual not just because of their anatomical location. They are very unlike the nostrils of other mammals. The blowhole of a cetacean is surrounded by thick muscular “lips” that keep the hole tightly closed except when the animal makes a deliberate effort to open it at the surface. Total submersion thus takes less effort for cetaceans than for animals that must actively exclude water from their air passages.4

Bones cannot protect the lungs of an animal at such high pressures, so cetacean lungs collapse during deep dives. To make this possible, their rib cages have many “floating ribs” that are not attached to the breastbone. Cetaceans also have diaphragms that are oriented nearly parallel to the spine rather than perpendicular to it (as in humans). Anesthesiologist Richard Brown and physiologist James Butler point out that “the large area of contact between lung and diaphragm in cetaceans allows for the diaphragm to smoothly collapse the lung along the lungs’ shortest dimension” (belly to back).5

There’s another reason why cetaceans’ lungs must collapse during deep dives. Air contains nitrogen, which under high pressure can be absorbed from the lungs into the blood. When pressure is reduced the nitrogen can bubble out of the blood, causing potentially fatal decompression sickness (“the bends”). By collapsing their lungs and expelling the air, cetaceans avoid this problem.

But collapsing a lung introduces a different problem: how to re-inflate it quickly at the surface. To insure that tissues in their collapsed air sacs do not stick to each other, the lungs of deep-diving mammals contain special “surfactants” with anti-adhesive properties.6

Streamlining Is Not Enough

Cetaceans have streamlined bodies that enable them to move rapidly through the water. Blue whales and killer whales can reach speeds of 30 miles per hour. But streamlining alone is not enough: To propel themselves, cetaceans possess flukes — flat horizontal lobes at the ends of their tails. Flukes are not passive, flexible flippers like those used by human scuba divers. Instead, fluke movements are coordinated by a complex system of long, powerful tendons connecting them to specialized muscles in the tail.

According to Everhard Slijper’s classic book on cetaceans, the flukes

can be moved with respect to the other sections, so that the fact that, during motion, the flukes make an angle with the rest of the tail is not due to their passive reaction to the pressure of the water, as it is in the fish, but to an active muscular exertion.7

Flukes are shaped like airplane wings, with a streamlined foil profile, rounded leading edge, and long tapered trailing edge. Biologists who analyzed flukes in 2007 concluded that they are “generally comparable or better for lift generation than engineered foils.”8

The Conundrum of Internal Testicles Female cetaceans have specialized nipples for suckling their young underwater. The mother’s nipples are recessed in two slits. According to Slijper, “while suckling their young, cetaceans move very slowly; the calf follows behind and approaches the nipple from the back. The cow then turns a little to the side, so that the calf has easier access to the nipple, which has meanwhile emerged from its slit. Since the calf lacks proper lips, it has to seize the nipple between the tongue and the tip of its palate.”10

If we wanted to turn a land mammal into a whale these are a few of the changes we would have to implement. Could the changes have happened accidentally, without design?

People who believe in Darwinian evolution point out that fossils have been found of animals that might have been transitional between fully terrestrial mammals and fully aquatic cetaceans. The fossil animals had legs but probably spent much of their time in the water. Darwinian paleontologists call them “walking whales” because they have a particular ear bone that had previously been found only in cetaceans (though the bone has now been found in an extinct land mammal, Indohyus, that is not classified as a cetacean). But the supposedly transitional animals are anatomically more like amphibious sea lions and otters than whales, and the transition from amphibious to fully aquatic must have happened in a geological blink of an eye.11 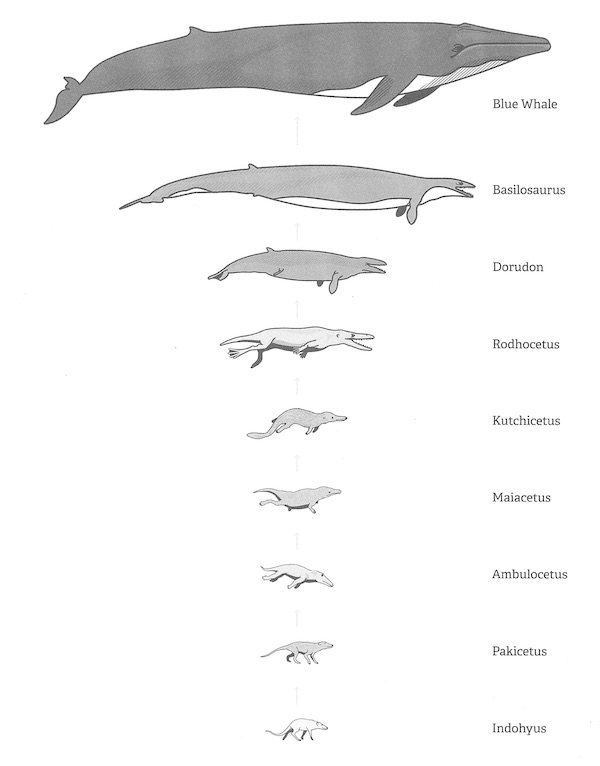 Even if the transition were perfectly documented with intermediate forms, however, it would not answer the “how” questions. How did the features needed for a fully aquatic lifestyle originate? How would the hind limbs of a sea lion turn into a fluke (which is very different)? How would a male’s testicles become simultaneously internalized and surrounded by countercurrent heat exchange systems? How would a female develop specialized nursing organs to inject milk forcibly into her calf? Indeed, why would any of these changes occur? Sea lions are already well adapted to their amphibious lives.

An intelligence could have planned to make fully aquatic mammals and designed these features to actualize the plan. But Darwinian theory says no design is allowed, and leaves us with little more than a fairy tale about how natural selection could turn swimming bears into whales.

Editor’s note: Dr. Wells’s latest book is Zombie Science: More Icons of Evolution. A version of this article first appeared in Salvo 41. It is published here with the permission of Jonathan Wells.