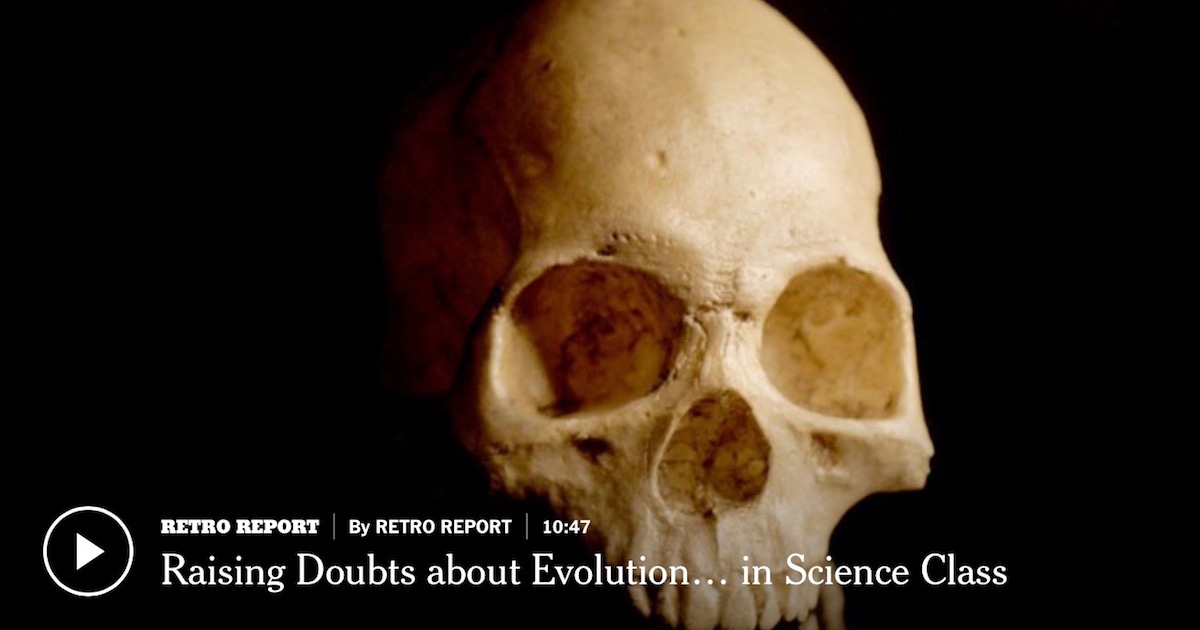 Somewhere in the multiverse, there’s an alternative reality where one of Earth’s leading newspapers, the New York Times, presents a visit to Discovery Institute and a consideration of issues relating to evolution, intelligent design, and academic freedom in an entirely fair and objective manner. But that universe is not our own.

Still, a short documentary via the Times represents some minor progress. (Click here to go there.) It’s a “Retro Report” video, running about 10 minutes, “presented…to provide a thoughtful counterweight to today’s 24/7 news cycle.” It’s accompanied by an article by reporter Clyde Haberman, and the idea is to look back at events of the past and their legacies. Here, the past events are the Scopes trial and Kitzmiller v. Dover.

The angle isn’t original, and you can hear the sound of axe-grinding in the background. Even watching with the sound off, the visual clues are enough to signal who the favored parties are (biologist and ID critic Kenneth Miller, perpetual high school student activist Zack Kopplin) and who the disfavored ones are (Discovery Institute’s Stephen Meyer, Douglas Axe, and John West). Watch the Retro Reports video and then compare it with a video featuring the same ID proponents and a couple more to highlight the forthcoming monumental Theistic Evolution critique. The latter video is produced by the book’s publisher, which obviously seeks to promote the book. Again, even with the sound turned off, you won’t have any doubt which short video is friendly to ID, and which is unfriendly, just from the visuals.

The article and the video are telling in what they leave out. The former quotes Steve Meyer, but omits his academic credentials (PhD from Cambridge University), as does the video, while also omitting those of Doug Axe (PhD from Caltech). Though the two are in fact central scientific and philosophical originators of the modern theory of ID, there’s no indication of this. Meanwhile Ken Miller is presented with his Ivy League academic affiliation. Even creationist Georgia Purdom is described as a “molecular geneticist,” a fact she’s permitted to underline in both the article and the video with the forthright declaration, “I am a scientist.”

Why the curious omissions? Maybe by eliding some of the relevant background you make it easier to depict serious people as yokels.

There is the typical sneering reference to ID as a “creationist stepchild,” aka (per Judge Jones of Kitzmiller fame) “creationism relabeled,” along with a standard inaccurate definition of the theory (“the universe is so intricate, so complex, that it has to be the handiwork of a master architect”), etc. This is also absurd, but I’m not going to get into it now. See here.

On the plus side, and it’s a big plus, the ID proponents are allowed to speak for themselves! That’s especially the case in the video, despite its presentation of Dr. West, Dr. Meyer, and Dr. Axe in a panning shot that makes them look like suspects in a police lineup. It’s remarkably rare that ID advocates are allowed to describe their own thoughts, as opposed to having a Darwin lobbying group like the National Center for Science Education, or an activist like Zack Kopplin, step in and speak, deceptively, for us. As Steve Meyer summarizes in the video and the article, “Often the theories that are presented as solid are not as solid as they’re presented.”

Also, Tom Bethell’s book Darwin’s House of Cards gets a nice push with this visual from our website. Thanks, New York Times: Naturally, the last word is given to Professor Miller. “Objections to evolution,” he observes, “are really weapons of disbelief that are used to disqualify the authority of science in general.” Well, that is ridiculous on a variety of levels.

First, ID isn’t an “objection to evolution,” but an evidence-based response and alternative to a particular interpretation of what drives evolution. It’s not a “weapon” directed at the “authority of science,” though it does take a critical approach in considering demands that the public blindly surrender its intellect and skepticism to “authority.” (See Steve Fuller’s excellent Foreword to Theistic Evolution.)

Nevertheless, this is a step in the right direction. You never thought you’d hear us say as much about something from the New York Times? Check it out and see for yourself. Admittedly, the bar for our being impressed was very low.